So far, we’ve discussed how to add an anchor point to the curves line…and how pulling that up and down vertically will manipulate your tones (make those pixels brighter or darker). However, what happens when we adjust the black and white points at either end of our curves line?

First, let’s make an adjustment…and then we’ll discuss the changes that took place.

If you take either the white point or the black point and move them inwards, you can see that much contrast was added to the image. 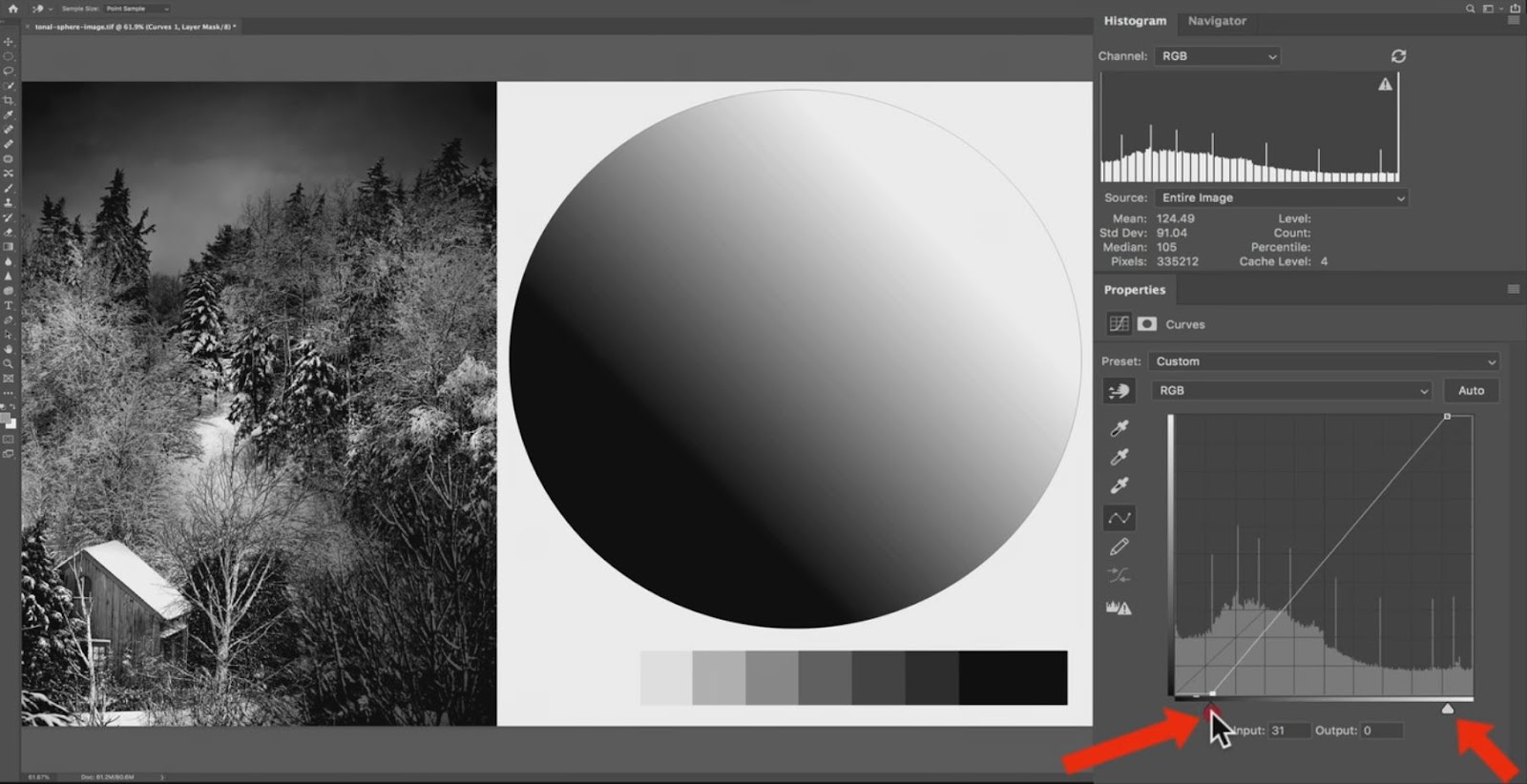 This adjustment is basically the same as a levels adjustment…or adding contrast destructively with the contrast slider over in Lightroom. What you’re doing here is recalculating the environment of available tones. In other words…you’re setting the “end caps” of your tonal range and compressing the breadth of available tones so that the transition from light to dark is more abrupt…and this sharper transition gives the appearance of more contrast.

So let’s jump back to Lightroom and make a similar adjustment to the point curve….pushing the white point towards the right and the black point towards the left (condensing the tonal environment that the image is working in).

You can see in the example above that the buffer range 83.9% and 100% has now been removed since we recalculated the tonal environment. 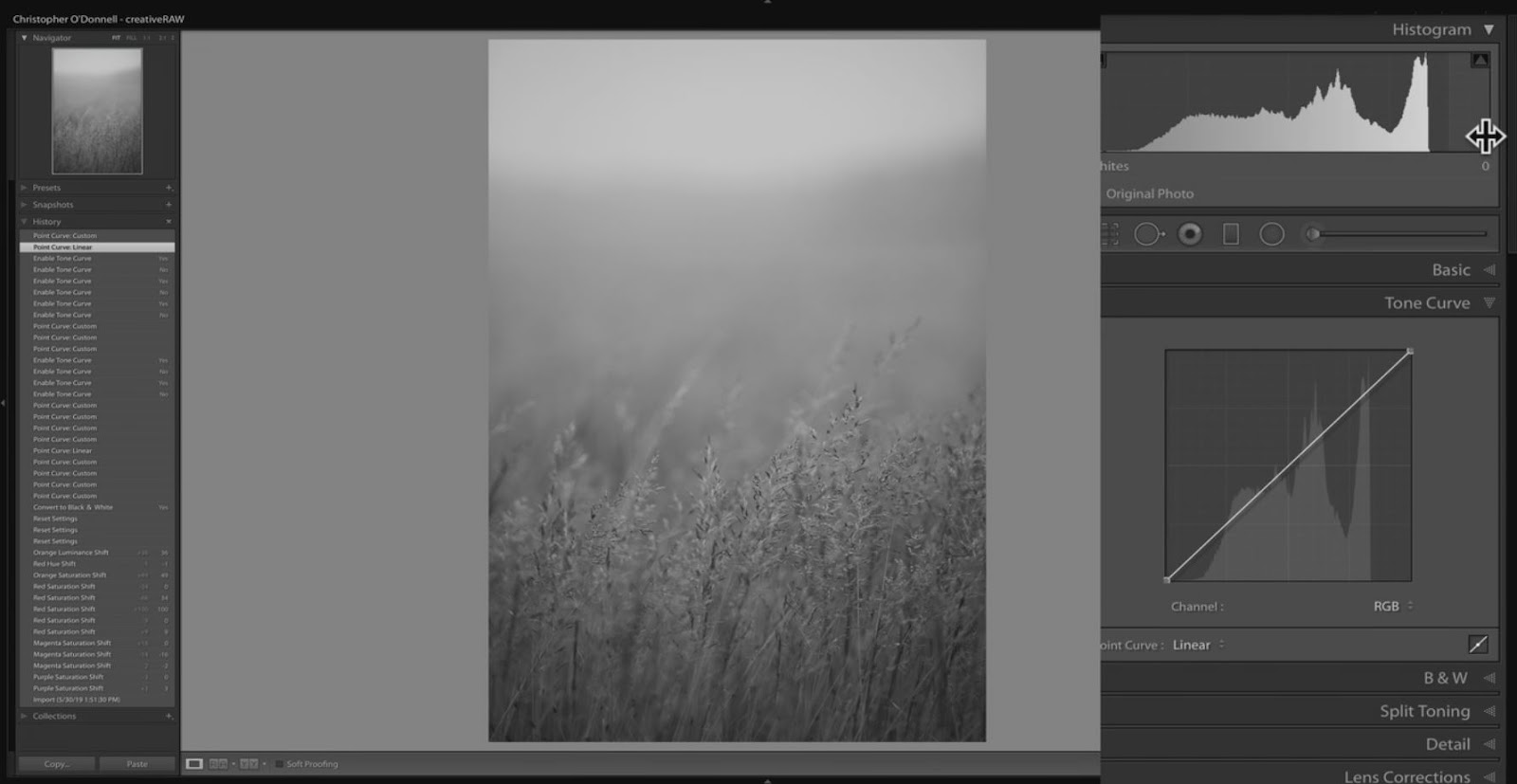 However, when I add that curves adjustment….notice how the histogram has changed (below). All those tones get pushed to the right-hand side because we are reducing that gap in the tonal environment. In other words, those tones are not available for use anymore. When you bring your black and white points inwards, you are eliminating values from the environment. You are adding contrast to make the darkest points in your image darker or the brightest whites in your image whiter.

To summarize: the black and white points determine the tonal environment, and the line between those two points (the curve) allow you to adjust the tones within the boundaries of that set environment.

Let’s jump back to Photoshop and take a look at the same image:

Let’s bring the black point in past where the tones start in the histogram (the darkest tones present in the image). We’ll do the same for the white point: bring it in past where the brightest tones for the image start. This will start to damage your photo since you are removing tones that are actually in the image, as opposed to simply removing the gap in the environment (what we did in the previous step).

In other words, we are crushing detail (or the variation of light and shadow) in the image.  By limiting the tonal environment, we are cutting off any detail in the image that is outside of the range bracketed by the black and white points (the curve).

As we discussed in a previous lesson on setting tonal limits, moving your black and white points along the vertical axis will darken your highlights and brighten your shadows…taking the tones on the extreme ends of the value scale and moving them more towards middle grey. However, this is also affecting other tones of your image (just to a lesser degree).

If I take the black point of this image (below) and move it up vertically on the graph, all the shadows are getting lighter. The biggest adjustment will be with the point you are shifting (here we have an input of 0 and an output of 36), and the effect will taper off as you move further away from this point.

In other words, this adjustment is feathered out along the entire line to prevent pixelation and artifacts. The pure black has gone up to 36 points in brightness…and if we sample point 97, that has only gone up to 120 –  a 23 point difference.

Raising the black point is a very common adjustment to lighten up the shadows and flatten the contrast. However, you would typically add an anchor point to restrain this lightness increase to only the darkest shadows.

If we take point 92 here and bring the curve line back down to 97…we are now primarily adjusting the shadows between 0 and 92 as opposed to the entire tonal range.

This helps to prevent your image from becoming too muddy and low contrast.

Now let’s make the same adjustment for the highlights by bringing the white point down vertically.

This is an excellent method to use if you have blown out your highlights, or want to scale back on how intense they are. Simply take the white point down.

If we take the black point up to middle gray and the white point down to middle gray, all the detail and variation of tones have been removed. 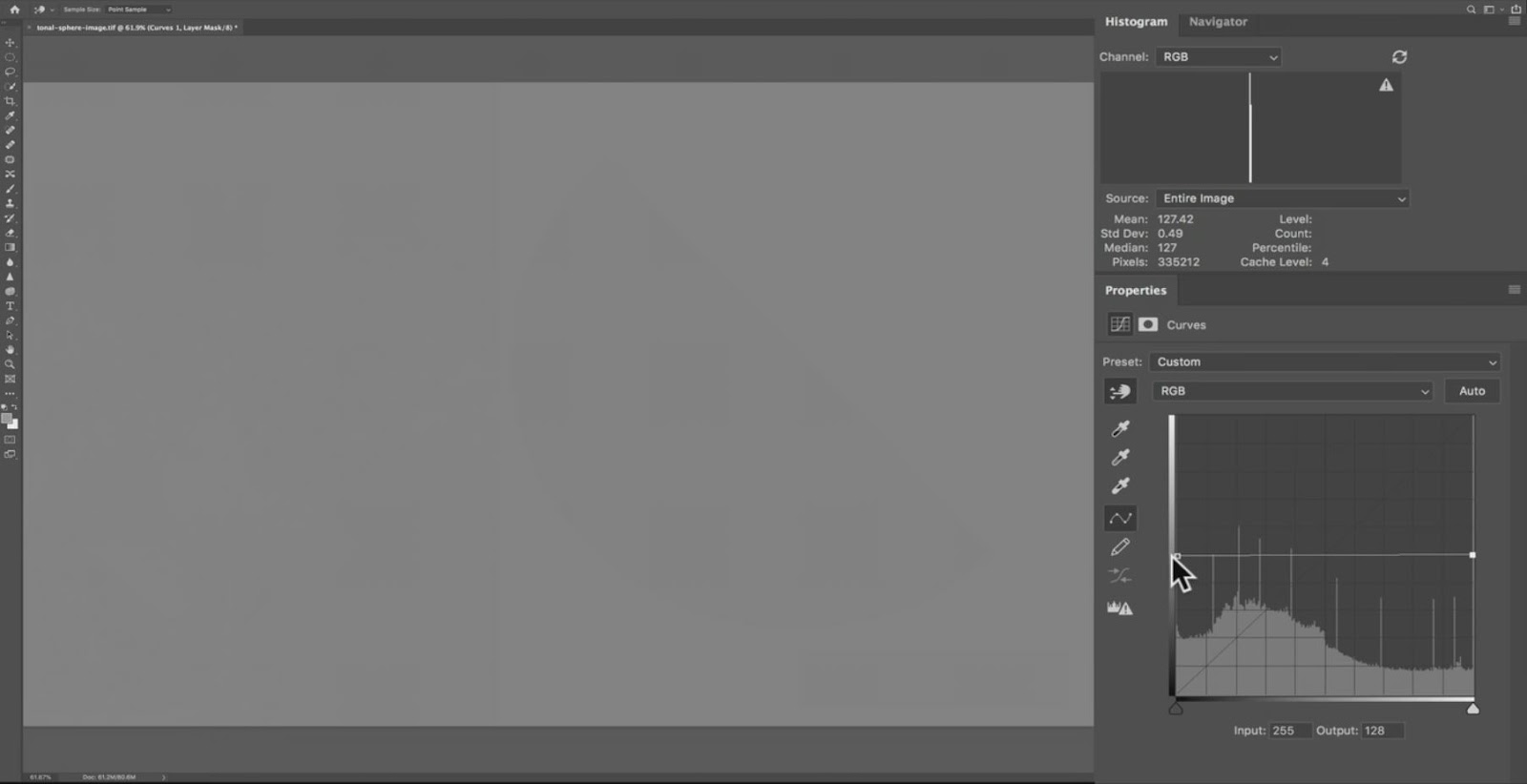 The black and white points of the curves tool control the tonal environment – or the contrast of an image.

Adjusting these points vertically will reduce contrast, while adjusting them horizontally will increase contrast.